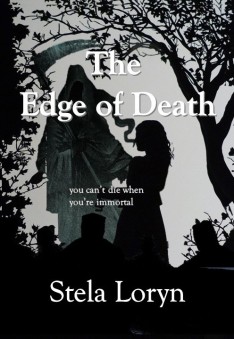 You can’t die when you’re immortal.

Micc is good at what he does. Azrail not so much. For reapers, change doesn’t happen often or easily. Reapers reap the souls and then focus on their own lives. Well, they focus on their existence. Reapers aren’t alive, right? Then, when there’s another soul to reap, they do so, and then the cycle continues.

But then souls everywhere begin getting stuck. Micc has a soul who can’t be reaped. But that’s fine. Moth doesn’t want to be reaped. She wants to help figure out the problem. Then, Reapers start disappearing and the Robes, their leaders, don’t know what to do. Micc and Azrail find themselves the only ones trying to find the truth. They’ll learn that there is more to being a reaper than they had ever been told and knowing the truth isn’t always best.

Everything is scared of something. Even immortal beings in charge of the mortal dead.

Artence wrung her hands together. “He probably wouldn’t want me telling you this,” she said, jutting her chin in the direction of Micc’s form long in front of them, “but I’ve had to deal with the Robes before.”
“What happened?” Moth found herself whispering out of instinct not wanting Micc to overhear them.
“I went against their wishes, and well, they aren’t law like humans have, but they do hold weight among the reapers, and I didn’t listen.”
“What did they ask you to do?”
Artence glanced toward Micc and studied him a moment before turning back to Moth and shaking her head. “Azrail wanted information. Knowledge that had been buried in headquarters for a long time. I found it and he used it, but the Robes didn’t want me to give it to him.”
“What was it.” Moth’s voice rose a little louder. She was tired of Artence’s way of answering her questions without giving her any real information.

The Edge of Death: Update #1

6 thoughts on “The Edge of Death”

Donations. Not a Subscription.