Stuck with how I’ve been able to manage my time. Stuck with how to continue writing this story. I haven’t actively worked on it in over a year, but it’s still the one I think about the most. Even during NaNoWriMo2019, I simultaneously took notes for The Edge of Death while writing Song of the Ship.

I took a look at all the projects I had currently started and decided which story I would solely work on until I send it off to be picked up by an agent, a publisher, and into the rest of its journey. The Edge of Death won out in the end despite others being in a more advanced state. 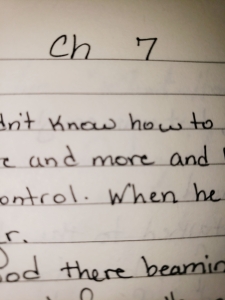 I have been reading over my outline and making some notes. NaNo 2019 only saw six completed chapters of the planned twenty-seven. There is still so much ground to cover. I wrote out some of chapter seven by hand over the last couple of days. I do better, at least initially, writing by hand rather than starting from nowhere on the computer.

And then I realized something.

NaNo is about meeting a deadline every day for a set number of days. Knowing what was expected of me and how much time I had to accomplish those goals helped fuel me forward. Now that I’m merely trying to get the first draft written without knowing how long it will realistically take, I’m having a harder time with getting the words down.

Once I could see how the wall in front of me was no more than a curb too high to drive over but low enough to climb over, continuing the story didn’t feel so impossible anymore.

Immense. But not impossible.

There is nothing in the way now but my own brain. My schedule is still as crazy as it has always been (or at least the way it’s been for the last year) and it’s not going to change anytime soon. So I’ll continue to write at work when things are slow, at home when there is nothing else to take care of and take it one day at a time.

The writing has started… continued. I have cute typewriter stickers to reward myself with on writing days. I have plenty of access to coffee between work and my apartment.

We’ll get there. One punch of the space bar at a time.

PREVIOUSLY: The Edge of Death: Update #1

View all posts by Stela Loryn

One thought on “The Edge of Death: Update #2”