As you can see, the third week of spending the month of September trying to rack up 10,000 words has gone extremely well.

The last 7 days have been a seesaw. I’m not going to lie, I spent more than a few days during week 3 trying to catch up on word counts, spending one or two days trying to smash in the equivalent of of several days worth of writing sessions. By the table above you can see that I achieved that and more, but scrambling for words was something I’ve been trying to avoid. Not by being perfect, but quite the opposite.

I’m trying not to put too much on myself. My daily word goal is more of a guideline than actual rule. But it’s hard not to think it’s something resolute to hold each day. I’m not too stressed about reaching my daily goal after the fact because it hasn’t put my in a tail spin. Despite my safety net, the main thing in the back of my head is getting the story written. So as long as I’m keeping the story moving along, whether I take a couple of days to relax mentally, everything is going to be alright.

I have achieved my goal for the month, but I’m continuing with my daily allotment. I’ve moved right along from the point of changing over my approach to 325 words a day. I am well into chapter 14 of 27, reached over 90,000 words, and the prospect of sitting down to write everyday no longer feels like the hardest task in the world. The ending to The Edge of Death is the first vision I ever had for this story and as a chronological writer I’m quite looking forward to being able to write those scenes that helped create everything that came before.

I am a little nervous for the intensity that will be NaNoWriMo coming up in November, but a little nerves is a good thing. For anyone who has participated in NaNo knows that the energy and word flow has the tendency to wane in week 3 and I have found no exception to this month long aspiration either. But I’ve beaten the week 3 woes and come out with a wordcount stronger than ever. 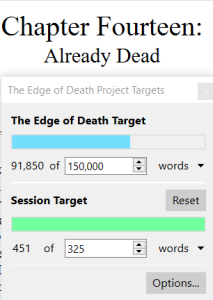 View all posts by Stela Loryn

One thought on “The Edge of Death: Update #9”